Superior College, Boys Faisalabad admission, Superior Group of Colleges opens admissions for intermediate F.sc, I.com, Ics, B.com, BSc, and LLB Urdu. Students who have graduated from the Matric exam can apply as the college begins regular classes for intermediate students for 2023-2023. Scholarships are limited to a few seats. The Superior Group Colleges admissions process is open on every campus in Pakistan. The college has announced that admissions are is open for the session 2023. Applications are now open to Local students, Pakistani students from overseas and International students who are enrolled in Undergraduate Bachelor Degree Programs. 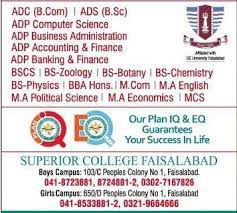 Superior Group of Colleges is recognized for its rapid growth in a relatively brief period of time. In the same spirit of opening new doors, Superior Group established a magnificent College situated in Faisalabad in 2007. The sprawling industrial city of Faisalabad which is also called “Manchester of Pakistan” gave a warm reception at Superior College. Faisalabad is Pakistan’s third most populous city that has played a great to the growth of industry and agriculture. According to an estimate, Faisalabad has a huge impact on revenues, accounting for about 20 percent of the total GDP in Pakistan.

How To Apply Online for Superior College, Boys Faisalabad Admissions 2023:

Candidates who are interested should know they are advised that Superior College, Boys, and Faisalabad admissions are open, and applicants are invited to submit their application at the earliest possible time. The complete application process for overseas, local Pakistanis, and International Students and eligibility criteria. how to apply online and contact details are provided in the official announcement of the institute below. The advertisement is also available on the official website superior.edu.pk

The last date when you can apply to Superior College, Boys Faisalabad admission 2023 is 02 December 2023.