3 Days Per Week Holidays In Educational Institutions By Government

3 Days Per Week Holidays In Educational Institutions are announced by The Government of Punjab for private and public schools within Lahore. Schools will be closed on the weekend of Friday, Saturday, and Sunday. The notice is issued to inform the public about this, and the three-day week of holidays is in effect until any further announcements. 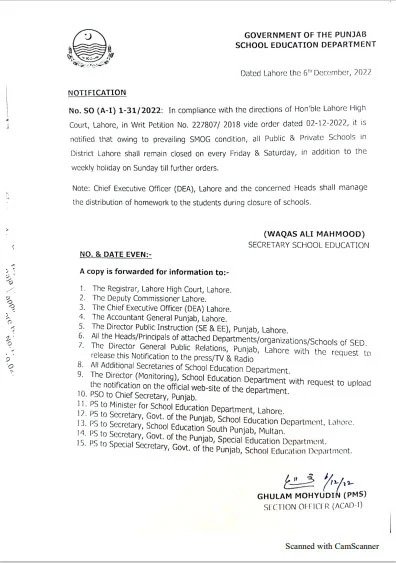 An environmental emergency has been declared in Lahore as well as other cities due to the heavy pollution. The city is consistently classified as one of the worst polluted cities around the globe. Masks are now mandatory at the schools of Lahore starting today.CM has also instructed the department responsible to immediately take steps to limit the negative effects of smog.

Punjab The Punjab Chief Minister Pervez Elahi said that an emergency was declared in the city. He also directed officials to draw up an action plan to address the deteriorating situation. “A ban is also in place for burnt crop residues throughout this province,” Elahi said, noting that strict measures can be taken on anyone in violation of the regulations.