Choose Recognized institutions for Higher Education is a new update. To benefit parents, students, and people in general, it is to announce that the Higher Education Commission (HEC) is authorized to establish conditions that institutions, which include ones that aren’t part of the State’s educational system, can be established and operated across the country in accordance with section 10-1(d) in Ordinance No. LIII, 2002 (Amendment Act No. XXI of 2021 as well as Second Amendment Act No. 2023 (XXII).

HEC issued an alert to students and parents to be cautious when choosing an institute that will allow admission to Higher Education. Students are advised of the fact that the Higher Education Commission has the authority to establish conditions for higher education institutions across the country that are not part of the state education system, which can be established and run.

Thus, the Higher education Commission HEC in exercising its power is able to award degrees from accredited institutions from the private and public sectors in Pakistan along with their campus accredited, which include institutions of translation providing foreign-language training in Pakistan. 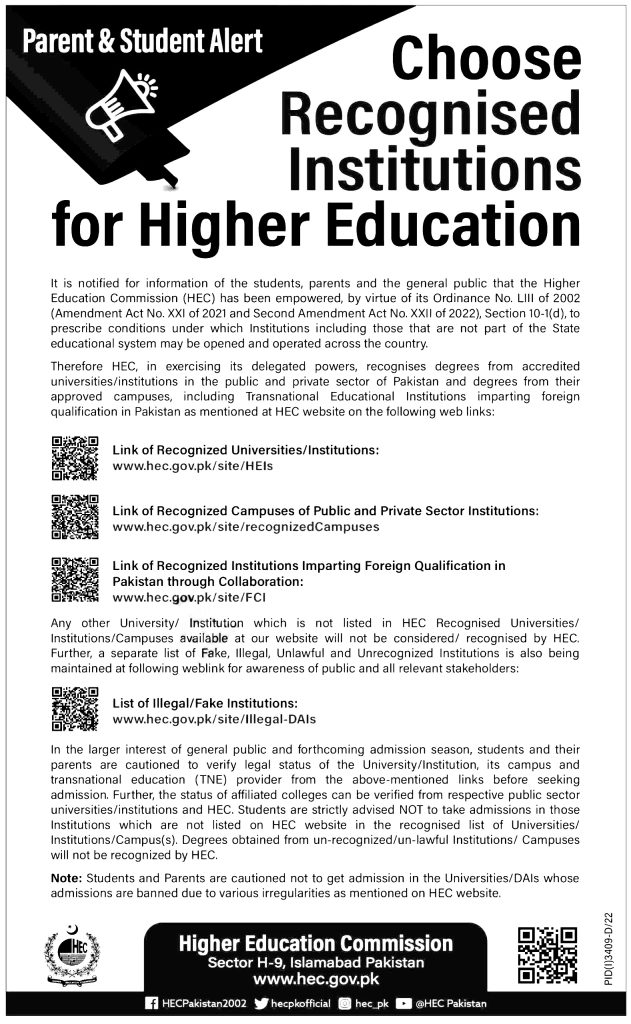 Therefore, HEC recognizes degrees from accredited universities and colleges within Pakistan’s both private and public sectors, in addition to degrees from accredited campuses, such as degrees awarded by Transnational Educational Institutions (TEI) that provide foreign degrees in Pakistan as stated on HEC’s website. HEC site the following hyperlinks

Note Parents and Students are advised not to seek admission to the universities/DAIs that have their admissions revoked due to various irregularities noted on the HEC site.