Govt Extends Winter Vacations in All Schools and colleges

Federal Education Ministry has extended the winter break for all schools and colleges in Islamabad. Due to the severe weather conditions, including the rain and cold in Islamabad ministers have made a decision to increase the number of winter holidays. In accordance with the notice, the winter vacations will be extended until the 7th of January in 2023.

The educational institutions will reopen on the 9th of January, as the 8th of January falls on a Sunday. All institutions of education, such as colleges and schools be closed due to winter vacations that will last until 7 January 2023.

Govt Extends Winter Vacations in All Schools and colleges of Islamabad 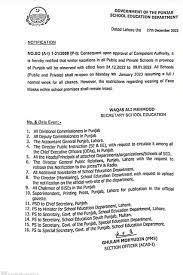 The cold weather and smog are also present in other cities in Punjab. This could also be the reason why Punjab Govt will also extend the winter vacations to all colleges and schools in Punjab to 9 January 2023. However, Punjab will have to wait for the official announcement. we will update you about the most recent winter vacation updates.

The weather in Islamabad during January remains cold, and the temperature drops. The capital city of the country on Thursday was soaked by rain. While, the district Murree located around 45 kilometers far from the city, experienced the first snowfall this season.

More details about Winter Vacations for all schools and colleges

Due to the extended winter holidays from 7 January 2023 All educational institutions, both private and public including colleges and schools are expected to remain in operation. In the meantime In the meantime, it is reported that the LHC has also instructed the Punjabi government to extend their winter vacation in Lahore. Other cities within Punjab also suffer from low temperatures and pollution. The winter break could be been extended according to the Punjab Government until January 9 2023 to the entirety of Punjabi institutions and schools.